LAICCC alum Su Grossman on what
prompted her generous donation to
​our Cultural Legacy fund campaign. 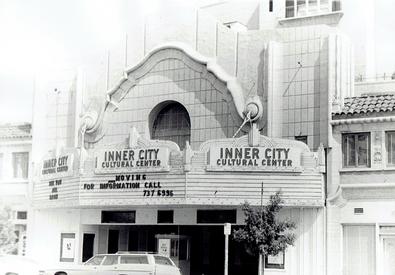 Inner City Cultural Center was housed in three theaters from 1965 to 1996: The Washington Boulevard Theater, the more notable converted Masonic Temple at New Hampshire Avenue and Pico Boulevard, and the Ivar Theatre in Hollywood. Beginning in 1966, the first physical location of the Center was at the intersection of Washington Boulevard and Vermont Avenue in the Washington Boulevard Theater, which had opened in 1929 as part of the Lowe’s theater chain. Architect and ICCC board member Robert Kennard (d) completed several renovations to develop the movie theatre into a performance space. The Center and its training institute were housed there until 1972.

In 1972, ICCC relocated from the Washington Boulevard Theater to the nearby Masonic Temple at 1308 S. New Hampshire Avenue. The new site was converted over time into a four-theater complex that also housed two dance rehearsal studios, an art gallery, a workshop, administrative offices, the Langston Hughes Memorial Library, the Stormy Weather Cafe, a photography studio and the box office. ICCC technical director Dennis Wilkerson (d) later made some additional improvements to the internal structure of the theater. All of the workspaces served as studios where classes were conducted for students enrolled in the Inner City Institute for the Visual & Performing Arts.

In 1986, ICCC purchased the Ivar Theatre in Hollywood. It was a dream of C. Bernard Jackson to upgrade from the small 99-seat theatre space at the New Hampshire Avenue & Pico Boulevard site to the 227-seat Ivar Avenue site with its Hollywood footprint. The new site housed a bar that became the property of the Center after the tenants’ lease expired.

The passing of staff members Elaine Gayle Kashiki in 1983 and Josie Dotson in 1990 severely impacted the administrative operation of the Center.

C. Bernard Jackson passed away in 1996, and  soon after his passing, financial hardship resulted in the New Hampshire and Ivar Street theaters going into foreclosure. Programs have since continued in other locations and more recently have been delivered virtually as well.

LAICCC administrative offices are presently housed in Leimert Park. Our 2020-2021 programs were delivered virtually due to pandemic restrictions.

The philosophical foundation of the Los Angeles Inner City Cultural Center and its programs and direction were formulated with the goals of building the LAICCC C. Bernard Jackson Memorial Library as well as new administrative offices and production, training and art gallery spaces, and restoring the Center’s training and live presentation activities.

Testimonials reflecting ICCC’s influence will now be documented, recorded, distributed, and preserved as a part of the collective creative, historic and cultural legacy of those individuals, organizations, and the City of Los Angeles, as created and maintained by their creators.

The ICCC’s history and legacy not only spans a period of more than 50 years, but includes many significant firsts that provide a foundation for future growth.

These include the introduction of many individual artists, arts traditions and organizations to its stages, adding not only to the cultural landscape not only of Los Angeles, but ultimately to the silver screen as well.

ICCC provided a diverse platform of inclusivity for many individuals and organizations alike who had previously been denied or selectively excluded from access to the mainstream.

The artists and organizations ICCC introduced to the West Coast, and in some cases the world, found themselves steeped in opportunity, training, exposure, and ultimately success in the industries of their choice, and thus ICCC exerted considerable influence on those industries.

Co-founders C. Bernard Jackson, a playwright, composer and musician, and Dr. J. Alfred Cannon, a UCLA neuropsychiatrist, conceived of ICCC in the early 1960’s as a vehicle for increasing cross-cultural communications among the various minority groups in Los Angeles. The impetus to turn this concept into a reality was sparked by the Watts Rebellion in 1965.

C. Bernard Jackson grew up in the Bedford-Stuyvesant section of Brooklyn, New York, where he was involved in one of the city’s toughest street gangs. Because he was able to speak Spanish, Jackson often served in a diplomatic capacity.

When he enrolled in the High School of Music and Art, Jackson was able to escape the negative influences of his neighborhood and obtain a broader view of the world. He subsequently attended Brooklyn College and then pursued a master’s degree in music at UCLA where he was also a rehearsal pianist in the UCLA Dance Department.

At UCLA he met the neuropsychiatrist, Dr. J. Alfred Cannon, a former native of Westbury in Long Island, New York, and a community mental health expert.

As Jackson reflected, “…in 1964…I met Dr. Cannon, a young psychiatrist… we were both involved in an experimental movement program. It took only a few conversations to reveal that his aims and mine were the same: To utilize whatever skills we possessed to improve the condition of people of color in a society which had barred all except a few from full participation.

“The cultural arena, Cannon and I agreed, was about to become an important battleground for the late sixties and seventies…Our goal: To mount a sustained campaign aimed at finding a way to rearrange the cellular structure of an organism, which if allowed to continue participating its present bad habits, would inevitably be destroyed either by a stroke or by the disease of cancer.”
-- C. Bernard Jackson “Art and Reality,” Neworld, Vol. 6. No.2, March / April 1980, p.10​

Jackson and Cannon continued their discussions and then joined with a diverse group of people who were interested in creating solutions to what they perceived as a perplexing problem of communication between and amongst racial, ethnic and cultural groups commonly known as “minorities.”

The Inner City Cultural Center was the nation’s first minority owned and operated multi-cultural, multi-ethnic, multi-racial and multi-disciplinary visual and performing arts institution, one that had at its core philosophy the incorporation of color-blind and non-traditional casting into all aspects of its programming.

The Inner City Institute also pioneered administrative and technical training programs to provide minorities with skills that would enable them to gain entry-level positions in the stage, film and television industries, whose record for hiring minorities at the time was abysmal, to say the least.

With the able assistance of Academy Award winning actor Gregory Peck, a board member of the National Endowment for the Arts’ National Council for the Arts, ICCC received foundational grants from the NEA, the U.S. Department of Education, the Ford Foundation and the Los Angeles Unified School District (LAUSD).

ICCC became a part of the Educational Laboratory Theater Project (ELTP), one of three theaters that bussed middle and high school youth to live theatrical performances as part of a national Arts-in-Education theater project. (Trinity Square Repertory Company in Providence, Rhode Island, and the Repertory Theater of New Orleans were the others.)

From 1967 through 1970, Los Angeles Unified School District bussed 35,000 students every year to the ICCC. Teachers prepared the students with written study guides, and the students spoke with the entire production team after each performance and wrote essays reflecting their experience.

The same performances were offered concurrently to paying audiences, many of whom, like the students, had never witnessed theatrical performances that employed ICCC's revolutionary color-blind, non-traditional approach to casting.

Both student and adult audiences at ICCC were introduced to artists who later became icons in the theater, film and television industries. Other ICCC alumni, having broadened their horizons, flourished in their respective careers following their immersion in the ICCC experience.

The core values and philosophy of Inner City enabled numerous individuals to participate in non-stereotypical roles -- formerly reserved for non-white people -- to access the stage, screen and television industries with skill sets and the confidence required to succeed in industries that provided limited access to minority peoples.

Thus, the Inner City concept of multi-culturalism was the Original Genesis -- or, in today’s vernacular, the “O.G.” -- of diversity, equity and inclusion.

​A partial list of ICCC alumni and associates speaks to the diversity of the artists who have been involved with Inner City Cultural Center. 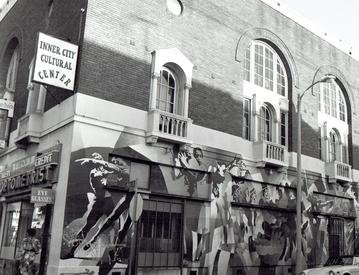